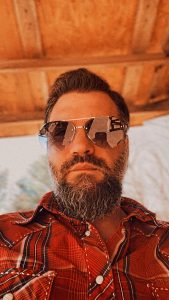 Seth Jones was born in the tiny east Texas town of Price, TX. He began writing songs and playing in rock bands at the age of 16. Seth has lived many lives, musically, and as a worker just trying to pay his bills. He has worked in everything from hardhats and flame retardant material to polo shirts and slacks, to medical scrubs. A lot of living has resulted in a lot of experiences to capture when writing his songs. Seth has also written and performed everything from punk rock to 90s surf rock to acoustic folk.

Seth has found his happy place by combining Texas rock with the country music he grew up loving, combined with some newer influences. Seth has drawn musical inspiration from Waylon Jennings, George Strait, Old 97s, Cross Canadian Ragweed, and Cody Jinks, just to name a few. In his songs, Seth covers love, hate, sadness, regret, spite, rage, hopelessness, redemption, and a number of other emotions that the common man can relate to. His live shows reflect a brilliant balance of heartfelt and fun songs along with stories and free flowing thought straight into the microphones.

Releasing the Puzzle Man album in late 2019, Seth is set to embark on a long trip in the country and rock genres, complete with traditional country sounds, lyrical depth, and melodies that stick with you long after the song ends.

Scroll back to top